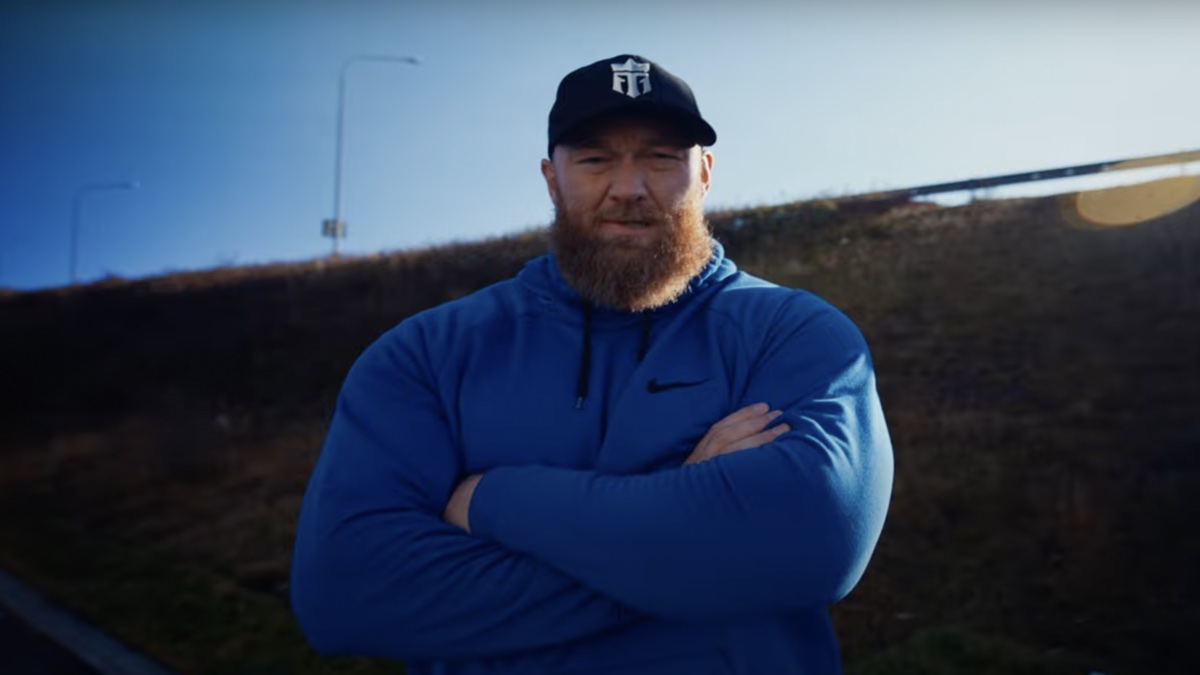 For the past two years, Hafthor Björnsson has strayed away from competitive strongman events. While the 2018 World’s Strongest Man (WSM) champ never officially retired, it seemed that the Icelandic athlete was on to a new stage of his athletic life with recent boxing pursuits and a radical physique transformation in mind. All of that appears to have been a temporary phase.

On Oct. 17, 2022, Björnsson posted a video to his YouTube channel announcing his intention to shelve his boxing endeavors and return to strongman at the 2022 Rogue Invitational. At the same time, the icon revealed he plans to break his weight-over-bar World Record at the Austin, TX, contest on October 28-30, 2022.

The context behind Björnsson’s new goal as a strongman is simple — he let his peers have time to break his weight-over-bar mark, but he seems to have grown tired of waiting. (Note: Björnsson established the current weight-over-bar World Record at the 2019 Arnold Strongman Classic when he threw 56 pounds over a height of 20’2″.)

“I gave it a few years,” Björnsson explained. “I hoped that someone would break it, but no one was able to. “So, I think it’s about time that I break this World Record. And then, who knows? Maybe I have to come back to strongman and break my own deadlift World Record.”

At the same time, it appears Björnsson losing his passion for boxing may have partly been a motivating factor behind a return to a strongman event.

“​​I’m 33 years old now, turning 34 in November,” Björnsson said. “For me, it was just like, should I spend the last few of my years as an athlete doing something I don’t love, or should I just go and focus on my businesses and focus on the things that I love, like lifting weights?”

[Related: How to Do the Hip Thrust — Variations, Benefits, and Common Mistakes]

The latter part of Björnsson’s clarifying sentiment about his record pursuits is an intriguing prospect.

Should the Icelandic athlete successfully break his weight-over-bar record figure at the 2022 Rogue Invitational, putting his World Record deadlift in front of his mind might be an even more impressive achievement. At the time of this writing, no strongman has ever surpassed Björnsson’s World Record pull of 501 kilograms (1,104.5 pounds) from the 2020 World’s Ultimate Strongman “Feats of Strength” series.

Some in the strongman community believe that 2017 WSM champ Eddie Hall still possesses the “real” mark because his deadlift of 500 kilograms (1,102.3 pounds) from the 2016 World Deadlift Championships (WDC) occurred at a neutral setting. Whereas Björnsson’s happened at his personal gym in Reykjavik, Iceland. Nevertheless, if he eventually travels down this path, Björnsson does own the official record mark and would be the first strongman to deadlift more than 501 kilograms.

[Related: How to Do the Hack Squat — Benefits, Variations, and More]

For this now-active strongman legend in Björnsson, staying away from his calling appeared to be too much of an ask over time. Should he break the weight-over-bar World Record and deadlift World Record in relative succession, it might be a blaring signal that the superstar is truly back where he feels he belongs.